This is basically a masterpost of everything gay Taylor has done this era.

As we all remember from the Reputation Era, during the tour Taylor brought Hayley out as a surprise guest.

In December the tables turned and Hayley brought Taylor out during her performance at the Ally Coalition Talent Show. It’s an event centered around raising money for LGBT Youth.

They performed Delicate, which has been claimed by the gays (Taylor agrees).  She was a happy bean, and everything was right in the world.

Taylor surprised Alex Goldschmidt and Ross Girard at their engagement party. Taylor sang King of My Heart for them as well!

For the US version of Taylor’s Elle article, she wrote about 30 things she’s learned in the last 30 (technically 29) years.

Here’s a quote that really stood out:

“We have to live bravely in order to truly feel alive, and that means not being ruled by our greatest fears.”

Sounds an awful lot like this part of her pride speech right?

“But it’s even more brave to be honest about your feelings and who you love when you know that that might be met with adversity from society.”

If you pay close attention to the numbers in the essay, the colors resemble the lesbian ride flag (different shades of red and pink). 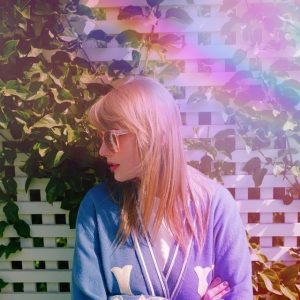 Last October, Taylor posted this picture of her and Andrea playing Scrabble. Seems harmless right? Hahaha, no. This is Taylor Swift after all?? Fans speculated that because of the caption and the fact that National Scrabble day is April 13th, that something would be happening that day. April 13th is also a day that was stamped on the calendar Taylor released.

Fans ended up being correct. On April 13th, Taylor announced that something (presumably a single) would be released April 26th, 2019. April 26th also happens to be Lesbian Visibility Day. Coincidence? I think not. Here’s another post with tons of notes pointing out what day the 26th is as well.

Taylor posted a close up of what appears to be her in a yellow suit wearing two rainbow rings.

It was eventually noticed that Taylor was wearing the two rainbow rings on her ring finger on her right hand. Here’s a post explaining more about what that means. This is important because there’s been heavy speculation that her and Karlie are engaged (at the very least).

While performing New Year’s Day at the gala, Taylor very clearly sings “I want HER midnights” not once… But TWICE. It happens around the 0:56 and 1:38 mark. The second time is much clearer than the first, as it seems she worked up more courage throughout the song. Obviously this was important for many reasons!!

Other than this iconic moment, this is one of the clearest “hers” we’ve ever gotten from Taylor.

A few days later, the media started to pick up on it as well:

My personal favorite theory hails from the Kaylor shippers, the faction of Swifties that believes that Taylor Swift and her former BFF Karlie Kloss were romantically involved. The theory is that Swift has been dropping hints about her love for Karlie Kloss since the Reputation era. On Tuesday night, Kaylor shippers picked up on something crucial: During Taylor’s performance of “New Years Day” at the TIME 100 Gala, Swift seemingly changed the lyrics from “I want your midnights” to “I want her midnights” not once, but twice. “New Years Day” is the final track on Reputation, which, in theory, could segue into the “next chapter…”

Then when Swift performed at this year’s Time 100 Gala, she apparently switched the lyrics in her song “New Year’s Day” from “I want your midnights to “I want her midnights.”

The song is about individuality, and the video is chock-full of rainbows. Here’s a great analysis of the video. It’s all very gay.

V Magazine wrote an article noting the queer undertones to the new single, and Taylor liked it on Twitter and Tree retweeted it.

A smaller nod to her queerness, but worth noting I think: 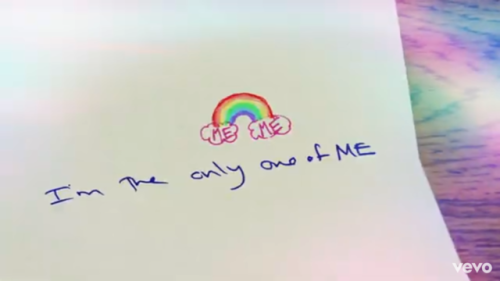 On the cover, Taylor is seen wearing a pride pin. She also confirmed in her likes on Tumblr that it *is* a pride pin, shutting down any talk that it isn’t. Taylor also liked this on Tumblr in support of her queer fans after the cover dropped.

As part of the spread, Taylor talked about how intoxicating, lovable and sexy Jodie Comer is as Villanelle in Killing Eve. Killing Eve is a show that revolves around Villanelle (a psychopathic assassin) and Eve (a MI6 agent) that are obsessed with each other. Taylor also talked about being obsessed with Killing Eve’s creator, Phoebe Waller-Bridge, and talked about how she likes Fleabag (another one of PWB’s shows). In an interview after the BAFTA’s in May of 2019, Jodie said she ran into Taylor at the Globes earlier that year and that Taylor said she watched Doctor Foster, another show Jodie was in. Seems like Taylor binged all of Jodie’s shows just like the rest of us. She’s truly one of us!

On top of that, Taylor noted that she likes King Princess, a queer artist that makes explicitly queer music. Her latest single is called Pussy is God. That means that Taylor is familiar with King Princess, Hayley Kiyoko, and Kehlani (Taylor added Honey to a playlist).

Within the spread Taylor also said:

Which is very reminiscent of her Pride speech from June of 2018 when she said:

She also said something similar in her ELLE essay in March of 2019:

“We have to live bravely in order to truly feel alive, and that means not being ruled by our greatest fears.”

Taylor created a playlist for Apple Music that included many LGBT artists explicitly singing about women. Here are a few of them:

When promoting her playlist using her animoji, she was wearing a sweater with a pride heart on it as well.

In kicking off pride month, Taylor took to Instagram to post a copy of the letter she sent Senator Alexander in regards to the Equality Act the House passed.

Within her letter and Instagram caption, she used language that appeared to include herself within the LGBT community. She proceeded to like these posts on Tumblr as well (x) (x) (x)

She also kicked the month off by donating to GLAAD!

Taylor’s outfit for her performance was… a lot.

She also gave a pride speech!

On June 13th, Taylor took to Instagram live to announce that her upcoming album ‘Lover’ will be released on August 23rd. She also announced that the second single off the album was dropping at midnight.

Taylor’s second single off of Lover is a homophobia-bashing bop and we stan.

Within the lyric video, instead of writing glad normally, she instead decided to write GLAAD. This is a nod to a major LGBTQ non-profit organization, and GLAAD even made stickers for fans to purchase.

Taylor showed up at the Stonewall Inn to perform Shake it Off. Many probably know why this is such a big deal, but if not, here’s more information.

Honestly… It’s probably just best to watch for yourself.

Too long, didn’t watch version: Taylor created a GAY trailer park filled with lots of out LGBT+ actors and celebrities!