Taylor and Karlie were in Big Sur at the same time around the four year anniversary of their first trip there. Their actual (dating) anniversary is most likely March 6th.

Karlie (plus all her sisters) attended Taylor’s show in Nashville, and it was a pretty big deal.

Karlie and her sisters moved to the B-Stage before Taylor sang Dress on that stage.

Asked a few friends to be in the You Need To Calm Down video 😄 Out tomorrow at 8:15am ET

That’s *literally* Karlie’s hand in the first clip. No if, and, or buts about it.

A week before Lover (the album) dropped, Taylor released Lover (the single). Quickly fans were able to link majority of the lines back to Karlie. Karlie also did this this right before the song dropped.

“I’ve loved you three summers now, honey, but I want ’em all”

In the song, Taylor references loving someone for three summers, aka three years. If you believe her beards are legit then she’s implying she’s been with Joe for three summers. However, that actually means she’s referencing a time when she was on a world pap-shot tour with Tom Hiddleston since the Lover album was completed in February of 2019… Meaning she’s only “been with” Joe for two summers. This lyric doesn’t make sense in the context that it’s about Joe. It does link back to Karlie though (shocker).

I have personally heard from four separate sources that Karlie and Taylor became engaged during their trip to Wyoming in late August of 2016 (in which Taylor rented out a whole ranch for Karlie’s birthday). If you do the math, that was three years ago. Taylor is also releasing the full-length of the album right around the date we suspect they became engaged since they post around August 23-26 every year.

“We could let our friends crash in the living room / This is our place, we make the call”

Shortly before Lover the single dropped, Scooter Braun (Karlie’s manager) planted an article in Page Six that trashed Taylor and said that Karlie and Taylor had a big fight and are no longer friends. As most know, it’s been a battle for quite some time behind the scenes with Scooter and Josh, but it’s become even worse since Scooter, with the help of Josh Kushner and the Carlyle Group, bought Taylor’s masters. In order to fight back, (presumably) Tree eventually planted her own article debunking what Scooter had planted, confirming the girls are fine and are still friends. In the Page Six article though, Scooter planted that Taylor was upset with the fact Karlie would just invite people over to Taylor’s place. Then in the song, we have Miss Taylor herself confirming that it’s THEIR place and they can have THEIR friends over. Thank you Scooter Braun for confirming Lover is about Karlie and that you’re full of shit.

Here’s a post pointing out this connection as well.

Part of the lyric video looking similar to something Karlie has done.

“Can we be this close forever and ever?”

Taylor inserted a video of firework sparklers, and they look eerily similar to the ones they lit at Taylor’s 4th of July party in 2016.

I’m sorry, but that’s not about boy blandness. It just isn’t.

This lyric is low-key kind of sad though if you really think about it.

Other Clips from the Lyric Video:

There’s a part in the video where it looks like Taylor is facetiming with someone while baking.

Taylor also included the video from the Rep era where she’s on the roof and someone’s knee flashed on screen. It’s always been assumed that was Karlie’s knee since it’s clean shaven.

If you don’t know why Big Sur is important, please check out this tag first!

This shot in the lyric video looks very similar to an Instagram post Taylor put up of her and Karlie on their road trip with the caption as lyrics from You Are In Love.

There’s also this shot of Taylor by a falcon (some sort of bird lol I don’t know) that looks like it was taken in Big Sur.

Karlie Listening to Lover on Repeat on Spotify – August 17, 2019

A day after Lover (the single) dropped, Karlie’s publicly verified Spotify account showed that she had been listening to Lover for 20 minutes straight… at 10 PM on a Saturday night.

On Tuesday morning, Spotify unveiled their newest billboard promo for the imminent drop of Taylor’s album. The image below was plastered in Times Square in NYC. 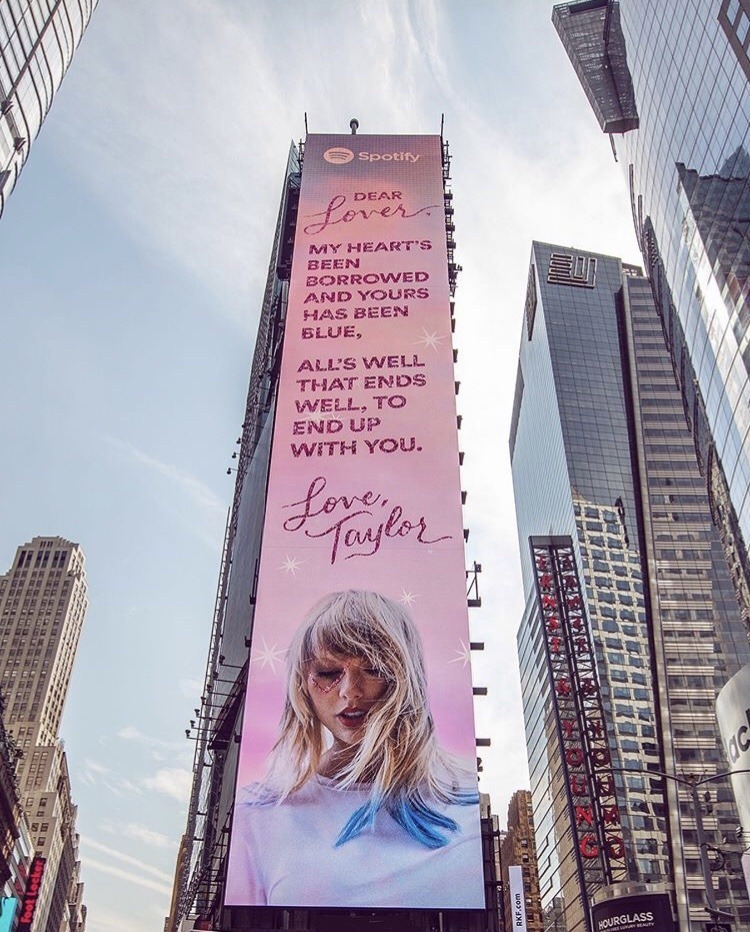 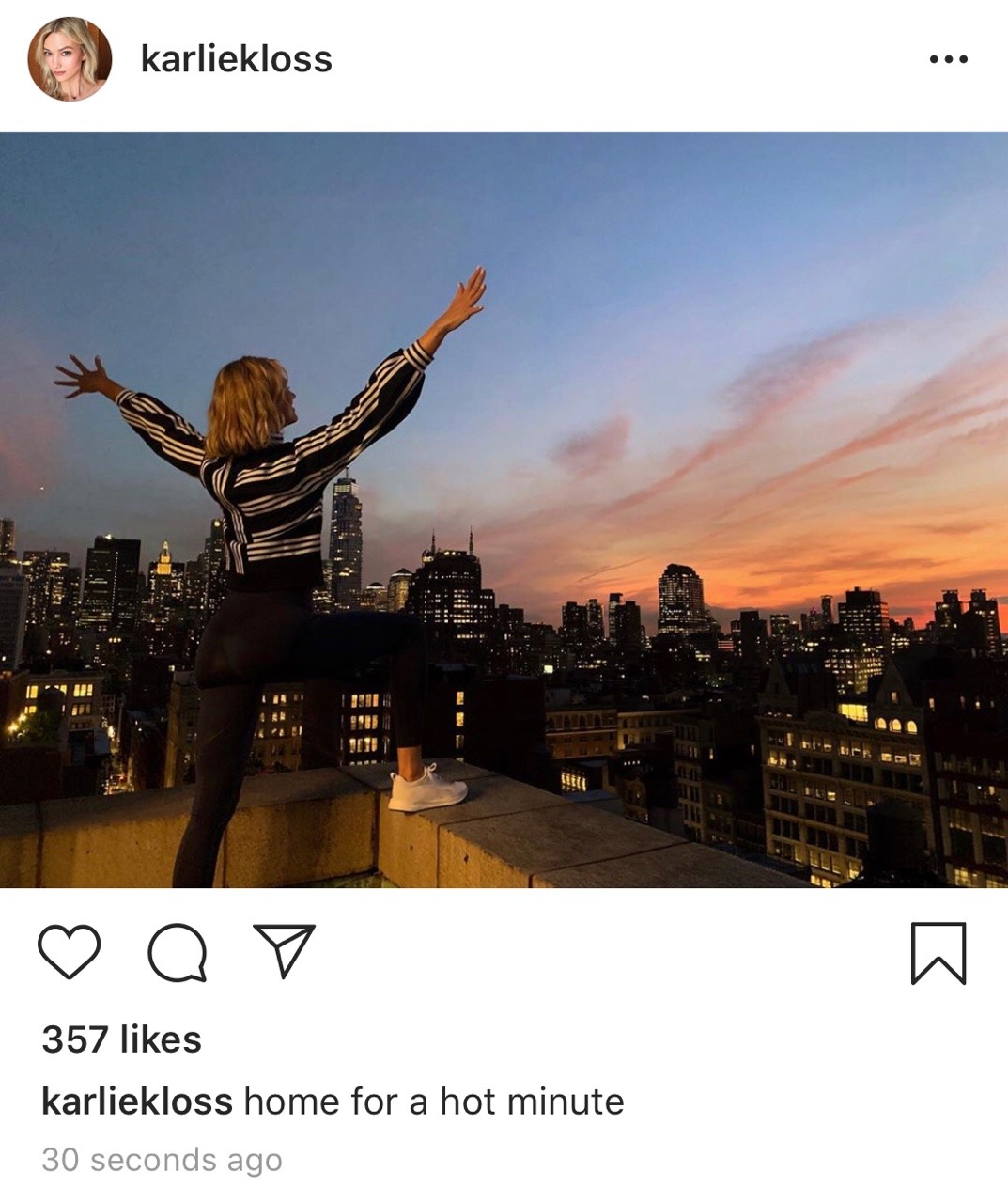 The timing of Karlie’s post was interesting to say the least. After a day of speculation from fans that the billboard was aimed at Karlie, that’s how Karlie ends her day. Inch resting indeed.

After Karlie listened to Lover (the single) on repeat on Spotify, I think it can be properly inferred that Karlie is involved with the Spotify promo roll out. There’s about a 0% chance that would be happening if the girls weren’t still connected in some way, shape, or form.

Want to help support this site?